Computers for Charities" - Our Story!

Our name. Computers for Charities, sadly belies the work & support offered by this Charity. Given our emphasis not just with I.T & computers, but people and changing lives!

We live in a world surrounded by 195 countries, containing a growing population of over 7 Billion Men, Women & Children.

Computers for Charities started in 1994. A response to aid new & small Charities within the newly emerging digital world of that time. Whilst balancing the environmental impact of Waste and Landfill usage and promoting the banner for Recycling & Reuse. (upcycling)

I.T remains integral for society & organisations today. But understanding the problems and pitfalls for organisations remain largely unchanged since our beginnings.

CfC is "Here to Help" We are a hands on registered charity (1107802) offering independent and impartial I.T advice / support to UK based Charities, Voluntary Organisations, Schools, Churches, Faith groups. But the remit remains much wider"

"What Support, Advice do you provide?"

Why not find out!. Just call or email us your query or issue, and we will seek to advise or help. There is no charge for this.

You can see from our website, our role has diversified over the years in response to received needs across the UK and wider afield.

CfC remains a pioneering organisation. One of the first to enter this field, identifying the vulnerability of organisations within the I.T sphere

Our journey began in 1992, before coming a registered charity in 1998 (1070286) thanks to the support and encouragement of the Late Rev Roger Porthouse and first trustee.

"CfC" no longer operates its Loan Scheme, but does continue to offer free I.T support, advice for organisations across the UK, Worldwide and much more.

Plus our educational programmes have provided new opportunities for many, Including African Schools on Line, providing ICT access to over 100,000 children worldwide. 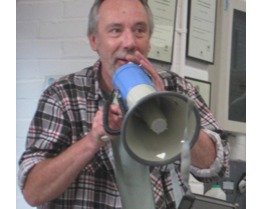 The story and journey continues.

As founder & Chairman of CfC My work life has been from working within the NHS as a Registered Nurse.

I encountered a life altering experience in 1992, when assisting with humanitarian aid amidst the savage conflict in the war torn country of Bosnia.

An experience which proved challenging in more ways than one, literally turning my life inside out. And a stark contrast between relative safety and humanity of England, and the madness of war and horror that abounds.

Similar exposure has continued over the years, as our support into numerous countries over these years has provided ongoing exposure to poverty, unrest, conflict & inhumane conditions.

But It was amidst the backdrop of Bosnia, artic conditions, human misery and upheaval the notion for CfC was hatched.

A notion that would become life changing was born at precisely 3am December 1992.

The notion was simple enough. Unlike some mind-sets in developing countries, as with UK and Western world, affluence following World War II has brought wasteful approaches to life, waste and property.

People get bored, even if something works. An attitude simply change it & Bin it.

In the same vein, back then Millions of computers were crushed & binned every year. A notion of computer reuse was simple. Then suggest companies donate, not crush and thanks to the NHS that is how it started and continues……

Things do not happen overnight, as with any seed it takes time to germinate and grow. Encouragement does help, as did my then six year old daughter Clare in 1992 when giving her prized Tiny Tears doll to help some little girl in Bosnia.

What an encouragement for her Dad to stick with it, and the concept of "CfC" crystallised.

Beginning in the loft of our bungalow and growing into sheds, garages, barns and now dedicated workshops.

2009 brought a key development for the charity, relocating to accessible and improved rented facilities in the market town of Hailsham, East Sussex and currently Eastbourne since Sept 2017. .

CfC was not established to promote good works or profit balances. But responding to people & NEEDS (NOT just Computers or I.T)

Why did you do it?

It's a good question. In a world where the thought is often. What's in it for me? Who does something for nothing? There has to be a catch!

But it's true, as a working trustee, there is no pay or expense account in the world I occupy.

In response to doing the right thing. I resigned from the NHS in September 1999. Letting go of a good job & pension to provide full time input as founder and Trustee of CfC.

A change which has required various life changes.

No. I am not rich or from the privileged classes. Have no assets, and Yes a price was paid in taking this decision, which leaves many dumbfounded

My life has not been without spot or blemish, and today I remain far from perfection. But as a committed Christian since 1976, which certainly saved me from probable premature death, much has altered. Including thinking, actions and life styles.

How do you explain Faith? Believing in something you cannot see! But that is what it is all about, it's certainly not easy and Christians do foul up and get it wrong.

I can say, if you are willing and prepared to surrender all, and for all. It's a personal decision not action, to become a Christian. Faith does & will take you on an unexpected life journey of finding acceptance of yourself, and peace, if you are prepared to give 100%.

In such I add, personally and as an organisation I /we do not discriminate or make judgements or criticism of others or any seeking advice or assistance.

What you see on this website represents only a sliver of a developing Vision that has thus far touched continents and lives. It comes from passion, belief, required time, commitment, life changes and perseverance to stay the course.

It remains humbling and a privilege to have experienced the range of cultures and such diverse issues. From developing Prison workshops in the UK to experiencing the poverty and hardship faced in the African bush or slum areas of Mumbai, and all achieved without mainstream funding.

Thanks are due to the committed and varied expertise afforded by our volunteers. Coming from all backgrounds and walks of life, it is they that have formed the backbone of CfC.

In tandem with our volunteers. The continued support of Individuals and Companies with donations of equipment, financial support, sponsorship have made all you see happen.

It is thanks to readers like you that major inroads have been achieved during our history. The frustration remains viewing global need on a daily basis, compounded by limited resources and so much to do.

If you have made it to the end, well done and thank you.

So remember Life & time is short! Don't waste it.. Get on 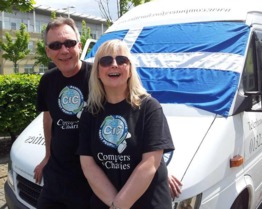 How Can I Help ?
There are many ways to get involved, see what you can do